America's Next Top Model
Register
Don't have an account?
Sign In
Advertisement
in: Cycle 11, Challenge Winner, First Call-Out,
and 5 more

View source
watch 02:24
Wiki Targeted (Entertainment)
Do you like this video?
Play Sound

Potter performed strongly from the start of the competition. However, in the fifth episode, Potter landed in the bottom two after offending Jeremy Scott, a designer, for lifting her skirt during his runway show. The following week, Potter received a first call-out for her natural disasters shot, won two challenges in episode ten, and received another first call-out for her simplistic and dramatic shots in the eleventh episode.

Throughout the competition, Samantha and Sheena were part of various feuds in the house, specifically with Elina and Marjorie.

She eventually lost to McKey in the finale.[1]

After the show, Samantha was signed to LA Model Management.[3]

She walked for designers Individuals by AMFI, EиD by Eva and Delia, Ready to Fish by ilja and Addy van de Krommenacker at Amsterdam International Fashion Week 2009 as part her prize in episode 10.[4]

She appeared in "The Big Bang Theory" in the episode "The Panty Piñata Polarization", along with Lio. Her role was a non-speaking one.[5] She was in the music video for Mary Mary's "God In Me". She was on the album cover "Beneath The Truth" by the rock band Eyes Of One.[6] 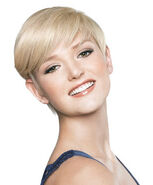