America's Next Top Model
Register
Don't have an account?
Sign In
Advertisement
in: Cycle 8, 3rd place, Challenge Winner,
and 13 more

View source
watch 02:24
Wiki Targeted (Entertainment)
Do you like this video?
Play Sound

5'10
Renee Alway DeWitt (born April 29, 1986 in Maui, Hawaii) is an American fashion model. She was the second runner-up of cycle 8 of ANTM in 2007. She was also the runner-up of the spin-off series Modelville.

Renee started modeling when she was 10.[1] Before Top Model, she modeled in New York, Europe and Japan and appeared in Seventeen and Italian Vogue.[2]

Renee heard about the audition the day before it took place in Chicago, and had been in town to get married. She went to the audition four days after she got married.

Renee was a stay-at-home mother, she and her now ex-husband Jason had a son named Troy.

On the show, Renee took some strong photos and it was said that she had the best body proportions for fashion, but was continuously criticized for looking too mature and old. Overall she had two first call-outs and two challenge wins.

Her attitude made her the main villain of the cycle. It was revealed in the recap episode that Dionne said that Renee is fake. The two almost got into a physical fight, but Felicia stepped in to break them up. Tyra later staged an intervention, with all the girls telling how Renee upset them. Renee realized a bad person could not win the competition, so she decided to change her attitude.

During the go-see challenge in Australia, Renee put her sons photo in her portfolio, as an attempt to impress the designer who has a new born child. This action received no positive effect in return as she did not win the challenge.

In the final episode, the final three contestants had to shoot the CoverGirl commercial. Renee ad-libbed that she thought her life was over when she had her baby nine months earlier, to which Mr. Jay stopped her and told her she needed to be more positive and not negative. Upon hearing Jay's advice, she managed to turn things around and excel the commercial. Not only did her brilliant performance win the affection of the judges successfully, her picture of the CoverGirl cosmetics also garnered her positive comments, as she was being described as elegant and sophisticated. However, she was eliminated in the finale due to not looking as fresh and youthful as Natasha and Jaslene. She didn't appear in bottom two until that episode.

Renee was selected as one of five alum for Modelville, a spin-off series within The Tyra Banks Show. In episode one, she stated she moved into a dangerous L.A. neighborhood where she saw a baby get shot. In episode two, she reveals to the other girls that she was physically and mentally abused by her father. This led to a fight with Bianca because she asked why her mom "Didn't do anything about it". In episode three, Renee struggles with her husband's fear that she will leave him if she wins. In the live audience finale, when Renee and Dominique are the final two, and its announced Dominique won, Renee broke down and stormed off in tears. She later said that she only had $11 in her bank account and put so much effort. The founder of Carol's Daughter, Lisa Price said that they wanted to work with Renee in the future.[3]

Renee has stated that she will move to Los Angeles and continue with modeling and shooting a film.[1]

She announced that she has signed with NEXT Model Management in Los Angeles from her MySpace. She also appeared in ads for Delia's, and appeared in US Weekly with Jaslene, Natasha and Dionne.

She has appeared in CBS TV series "Shark", in the episode "In Absentia".

On June 28, 2013, Renee was arrested after a six-hour standoff with police in Palm Springs, California. She was arrested for multiple offenses, including drug possession, burglary, committing a felony while on bail, theft, and fraud. She also had prior arrests that year for grand theft of more than $400, grand theft with a firearm, and receiving stolen property.

On December 10, 2014, Renee was sentenced to 12 years in prison after pleading guilty to four felony burglary counts, one count of vehicle theft, one count of firearm possession, and one misdemeanor count of identity theft. She was dismissed of more than a dozen other counts under a plea agreement.[6][7][8] 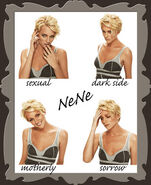