America's Next Top Model
Register
Don't have an account?
Sign In
Advertisement
in: Contestants, LGBT Models, Cycle 15,
and 15 more

View source
watch 02:07
Spider-Man: No Way Home Trailer Dropped - The Loop
Do you like this video?
Play Sound

Kayla was known for being an open lesbian. She was the twelfth girl called into the final fourteen girls at casting.

Kayla began the cycle as one of the frontrunners, getting second call out in the first two photoshoots. Her photos continued to wow the judges, until episode six, where Kayla was in the bottom two with Kacey, but was spared for having a stronger portfolio out of the two. She redeemed herself, getting second call out again the next episode. She earned a total of two first call-outs in her cycle, but the judges thought she had yet to master her facial angles, and Chelsey was picked as a finalist over her and Jane.

Kayla returned to All-Stars with jet black hair. The judges had high expectations of her due to her gorgeous pictures from her previous cycle, but the judges thought she was unable to deliver gorgeous photos or enough star quality, and was in the bottom two with Sheena in episode two.

In the beginning of episode four, she had a severe seizure which led to a hospitalization.

She was sent home in episode seven, in a double elimination along with Bianca.

Kayla has taken many test shots, and has signed with Donna Model Management in Japan. She was in one magazine called Zouch.[1]

She has since retired from modeling, and has no known social media. 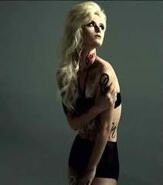