America's Next Top Model
Register
Don't have an account?
Sign In
Advertisement
in: Contestants, Female Contestants, Cycle 10,
and 15 more

View source
watch 01:33
House of the Dragon Trailer - The Loop
Do you like this video?
Play Sound

5 ft 11 in (1.80 m)
Dominique Reighard is an American fashion model. She placed fourth on cycle 10 of ANTM in 2008. She later won the spin-off series Modelville. She came back again for All-Stars in 2011, where she placed fifth.

Before the show, Dominique walked in Columbus Fashion Week in March 2007.[1]

In auditions, Dominique revealed that she was in an abusive relationship. She was the final girl called into the house, with Tyra making an extra slot for her, because she said thirteen is an unlucky number.

She was known for her fights with Whitney, Claire and Lauren. In episode five, she got into an argument with Whitney after she missed her time for the phone. She eventually accused Whitney of being a racist. In episode six, her alarm clock became annoying to the group, Claire in particular. They all ganged up on her, bringing Dominique to tears.

In panel, she was praised for her high fashion appeal, but criticized for photographing old and looking manish. She appeared in the bottom two with Allison in episode three, and was saved.

She was eliminated in episode twelve over Fatima for not being as strong as her competitors, as well as the judges doubting her natural modelling ability.

Along with four other alumni, Dominique was invited to compete for a contract with Carol's Daughter to be their new spokesmodel. She won the competition, beating Lauren, Fatima, Bianca from cycle 9, and eventual runner-up, Renee from cycle 8.[2]

However, the judges thought she was not memorable enough, despite arguably having the strongest portfolio of the remaining girls, so they sent her home over Angelea in episode ten.

After the show, Dominique was in the magazines Seventeen, J'Adore, Fashion Q&A, Ebony, C, HUF, Matte, Kontrol, Mahogany Vogue, Snytch, Flame and Trendsetters To Trendsetters. She had also been featured on the websites of Essence, Sovereign Soles and ads for Carol's Daughter and Grove City Dental.[3] She posed with Allison Harvard for The Philippine Star SUPREME.[4]

She has since retired from modeling, and is now the co-owner of E.E. Ward moving and storage, which is the oldest black-owned business in America.[5][6][7][8]

Her fight with Claire, Lauren and Whitney was ranked number six on MsMojo's YouTube video "Top 10 Craziest Fights on America's Next Top Model".[13] 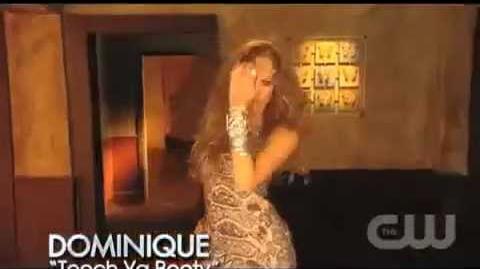