America's Next Top Model
Register
Don't have an account?
Sign In
Advertisement
in: Cycle 9, 4th place, First Call-Out,
and 22 more

View source
watch 02:07
Spider-Man: No Way Home Trailer Dropped - The Loop
Do you like this video?
Play Sound

32
Bianca Golden (born October 14, 1988) is an American fashion model. She is best known for being a contestant on cycle 9 of ANTM in 2007, where she finished fourth. She later came back for All-Stars in 2011, where she placed joint 8th/9th with Kayla Ferrel. She also competed on Modelville.

Golden attended Hillcrest High School in Queens New York. She started to go to fashion castings when she was 13 years old.

Golden was the second contestant selected to be part of the finalists. She was known for being the main villain of the cycle, clashing with Ebony, Lisa, Saleisha, Chantal and Heather (whom she was perceived as a bully towards) over the first three weeks. She landed in the bottom two at the second panel, but was saved over Kimberly.

She was originally supposed to receive a long blonde weave for her make-over, but due to her hair being damaged her head was shaved, a look that was praised among the fandom.[1]

She revealed that she had a fear of heights, which handicapped her in both the rock climbing and gargoyle photoshoots as well as the first challenge in China.

After being criticized repeatedly, she studied fashion magazines to learn how to smile with her eyes and managed to impress the judges on her recyclable materials photoshoot, where she portrayed oil. She won the first call-out in the panel before overseas, and later won the go-sees challenge. Despite a heartfelt speech about her improvement despite her lack of natural model potential, she was sent home, giving a teary farewell interview that redeemed her in the fans' eyes.[2]

Bianca was one of five alum selected for the spin-off series within The Tyra Banks Show. In the first episode she discusses getting into a highly publicized fight with Nikki Blonsky at the Providenciales International Airport in Turks and Caicos.[3] She also was known for clashing with Renee, judging on her moms parenting skills. She placed fourth in the finale.

In the premiere, Bianca was upset when Bre didn't tell her she was cast on All-Stars with her, because they were roommates. Bianca said the argument was nothing. She also expressed her hatred of Camille when she entered the house, and was worried that she was going to hug her.

She was involved in a rivalry with Shannon and Lisa. In episode five, Shannon miscalculated the phone time schedule for each girl and Bianca addressed this to her, causing Shannon to cry. Lisa stepped in to defend Shannon, angering Bianca further. They also fought again after the Kardashian runway show, with Bre blocking Bianca from the two. Bianca constantly dubbed Shannon "The Crying Christian" throughout.

In episode seven, Bianca complained that the challenge involved posing in a bath tub. She stated that Beyoncé would never pose in one. She was eliminated with Kayla because of her bad attitude.

Bianca was one of the alumni to appear on the America's Next Top Model: Exposed special and an installment of The Tyra Banks Show designed to promote cycle 10 and review the most memorable moments and girls of the previous cycles.

She has modeled on Project Runway at Fashion Week for Chris March,[10] and was featured as Korto Momolu's runway model for the season 5 finale. She appeared on BET's Rip the Runway show alongside Jaslene Gonzalez, Toccara Jones and Camille.[11] Golden was also part of the US Virgin Islands Fashion Week and Jacksonville Fashion Week in Jacksonville, NC.

After the physical fight with Nikki Blonsky and her family, Bianca was jailed, but soon bailed out.[12]

She is now working as a teacher at Kipp Amp Middle School in Brooklyn, New York.[13] She was one of the guests for the cycle 17 episode of Jays Chat in 2020.[14] 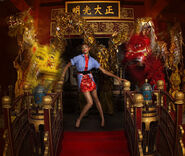